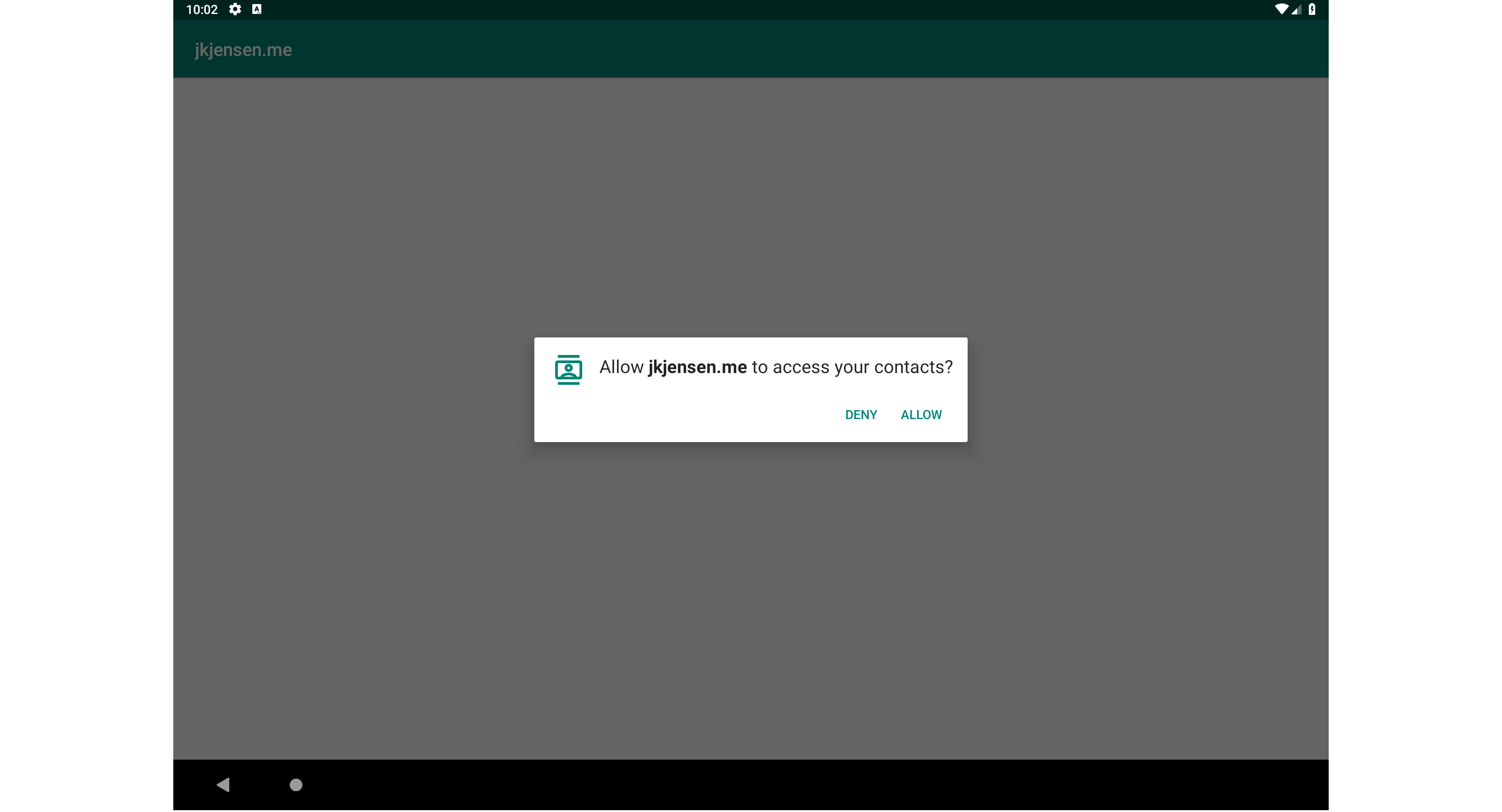 This post is the second part of a series on mobile security where we will explore the Android platform, how security is approached in a mobile context, and what that means for future mobile platforms like AR and VR. part 1

Permissions are a fundamental part of any computer system’s security model and mobile systems are no exception. We briefly addressed them briefly in the last post on architecture, but here we will go into detail on what permissions are and how they are enforced. We will explore how this affects both system and application development. Digging deep into the mobile permissions model allows us to gain intuition for the interaction between different parts of the operating system, and in particular how Android is designed to protect against attacks.

In an Android shell, you can run pm list permissions to list all of the permissions known to the device. Spoiler alert: there are a lot of them. I count about 600 on my emulated device running Pie. We won’t go into the details of why this output is formatted the way it is, but each line corresponds to a unique permission, either defined by the system or by an application.

permissions at the user level

Complying with the principle of least privilege, Android only allows permissions as granted by the user, not by default. Therefore, any access to system resources, hardware, or other applications requires permission. This

As a measure to further protect users, version 6.0 (Marshmallow) and higher requires that some permissions that are considered dangerous must be granted both at install time and at runtime. This approach was introduced in an effort to increase awareness of permission approval among users, though as we will see it only provides minimal protection against malicious apps.

Instead, this two-layer approval method exposes the user to a clearer picture of how the application developer intends to use the permission (or claims to intend to use the permission), and I think often drives growth of apps that use system resources in creative ways.

permissions at the application level

Adding a permission to an application is as simple as adding a <uses-permission> tag to the application’s AndroidManifest.xml file. For example, the

permission at the system level

brief aside: selinux Since Android is based on Linux, many familiar security concepts apply either directly or analogously also to Android. For example, instead of representing physical system users, UIDs (User IDs) represent different applications on the system, giving applications all of the same isolation protections as user accounts do on Linux. Android uses Security-Enforced Linux (SELinux) policies in order to define at the kernel-level access control policies. Fine-grained controls can be used to protect various kernel-level components of the OS like processes, sockets, and the filesystem. We will delve a little deeper into SELinux on Android in a future post.

The system manages a database of all known permissions on the device, all installed packages on the device, and each of their attributes such as the signing certificate, version, and assigned permissions in /data/system/packages.xml (you can view this file by copying it to your local machine with adb or from the device explorer in Android Studio). A system service called package manager manages this database.

Each package is listed under its own package tag. You can see as properties on this tag the system configuration for this app - its UID, version, and assigned permissions.

A permission’s protection level corresponds to the level of risk it presents to the user if granted. Thus, the more dangerous a permission, the more a user should be aware of its use.

normal: Normal is the default protection level. Permissions marked normal are not considered dangerous and are granted automatically.

signature Permissions with the signature level are considered more secure because they are signed with the same signing key that the application that declared the permission is signed with. In order to successfully grant this permission the developer must own the signing key.

signatureOrSystem In addition to securing access behind a key, the signatureOrSystem level adds upon the definition of the signature level by also allowing applications that were built with the system to grant it without the key. OEMs then are able to declare system-specific permissions that can be shared without sharing signing keys.

The package manager service assigns each app a UID at install time /etc/permissions/platform.xml contains GIDs for each permission. When a permission is granted for an app, that app is given the associated supplementary GID. Note: Android GIDs are static, no /etc/group file exists on the android system.

An app’s associated GIDs can be viewed by using

to get the app’s pid, and then

to see the process status. The app’s GIDs are listed under the Gid heading.

Becuase system processes don’t have packages associated with them, their permissions are listed in the platform.xml file, but under <assign-permission> tags. Each of these tags assigns the permission to the process’ static UID.

brief aside: the zygote process Each Android app runs in the android runtime (ART). In an effort to save memory, the zygote process starts on system initialization and loads system libraries into memory. Each application that is created is a fork of the zygote process. Since Android copies-on-write when forking, all apps share common system resources like the Java standard library. After forking, OS scheduling, security context, and the process’ assigned resources are configured before finally launching the actual application code.

Now that we have seen how Android assigns permissions to a given application or system process, we can move on to how the operating system enforces permissions.

At the kernel level, process GIDs are inspected to verify matching capabilities before allowing access to kernel-level constructs like sockets and the Android VPN driver.

System daemons use local sockets to communicate with each other and the rest of the system, and a definition of these few core sockets and their permissions is listed in the kernel init.rc file that runs at system initialization. This configuration is designed to be unchangeable at runtime.

We won’t dig into how permission enforcement happens with pending intents, but their behavior is similar enough to what we’ve described about activities and services that for the sake of brevity we will broadly assume a similar approach – callee requires the permissions of the caller. The actual implementation is slightly more complex than this but is beyond the scope of my current interest to explain.

Permissions checks also occur during BroadcastReceiver transmissions. If a sender declares a required permission in their call to sendBroadcast(), the receiver will not be delivered the broadcast unless they have been granted it. This can also be declared in the opposite direction, where recievers may require certain permissions from broadcasts that would like to target them; enforcement for this case happens in the same way.

Running each application as its own process is clearly not enough to protect system, application, and users from targeted attacks, particularly at the interfaces between applications and between application and system. The evolving Android permissions model is thus designed to give the developer flexibility in their design choices while providing access to only capabilities explicitly requested – the one fatal flaw being that once granted, the application has unchecked access to system resources.